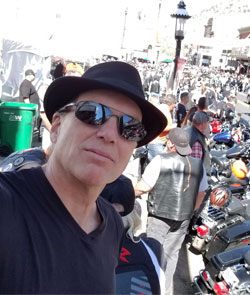 
Nathan makes his living as a software engineer. At age 18 he got a job as a ‘gopher’ at a technology firm and progressed to senior software engineer within five years. Now, as a consulting engineer, he develops programs for automatic semiconductor manufacturing equipment.

Nathan was exposed to music at a young age by his talented mother. He was singing at age seven, and playing guitar at age 14. He played lead guitar in a few garage bands through his school years, dreaming of being a rock and roll star. As a young adult, Nathan wanted to incorporate his passion for singing with his guitar playing, so he bought an acoustic guitar and taught himself how to play chords and rhythm. That developed into playing and singing with friends on camping trips most weekends, for several years.

At age 15, Nathan’s father taught him how to fly a light plane. He learned to take it off, land, do some simple aerobatics and fly in formation through traveling to fly-ins such as the famed event in Oshkosh. Then at age 18 while traveling on Highway 1 along the coast, he saw hang gliders flying over the cliffs of Marina beach near Monterey, California. After stopping to watch, he became excited enough about the sport to come back the next weekend and start taking lessons.  With his flying background, he quickly progressed and was soon soaring the cliffs on his own. Competitions around the nation soon followed, which led to the opportunity to regularly play music around a campfire! After 25 years of flying hang gliders, Nathan transitioned to flying sailplanes (full size gliders) and moved to Minden, Nevada – widely known as the best soaring area in the world.

After moving to Minden, Nathan wanted to share his talent and passion for music with others. While playing acoustic solo gigs around the Tahoe area, he became acquainted with several local musicians. After a brief stint with another band, he set out to form his own musical group. Margaret Dixon became the bass guitar player, and with another guitarist and a drummer, Nathan formed a band he named “The Scarlet Verbs.” This foursome played many gigs around Tahoe. Eventually though, other demands pushed the drummer and the other guitarist into leaving The Scarlet Verbs, which meant the band needed, at least, a new drummer.  Margaret knew Dan Wold through her work at the schools, and The Scarlet Verbs have been playing as a trio ever since.